iPhone 7 Plus: How’s that new camera?

Double the cameras, double the fun?

As a full time professional photographer, I try to remind people that the best camera you have is the one you have with you. Since I have yet to permanently graft a DSLR onto my body, my best camera is often my iPhone. So, is the new iPhone 7 Plus good enough to help alleviate the anxiety I get every time I leave my camera at home? Let’s find out! 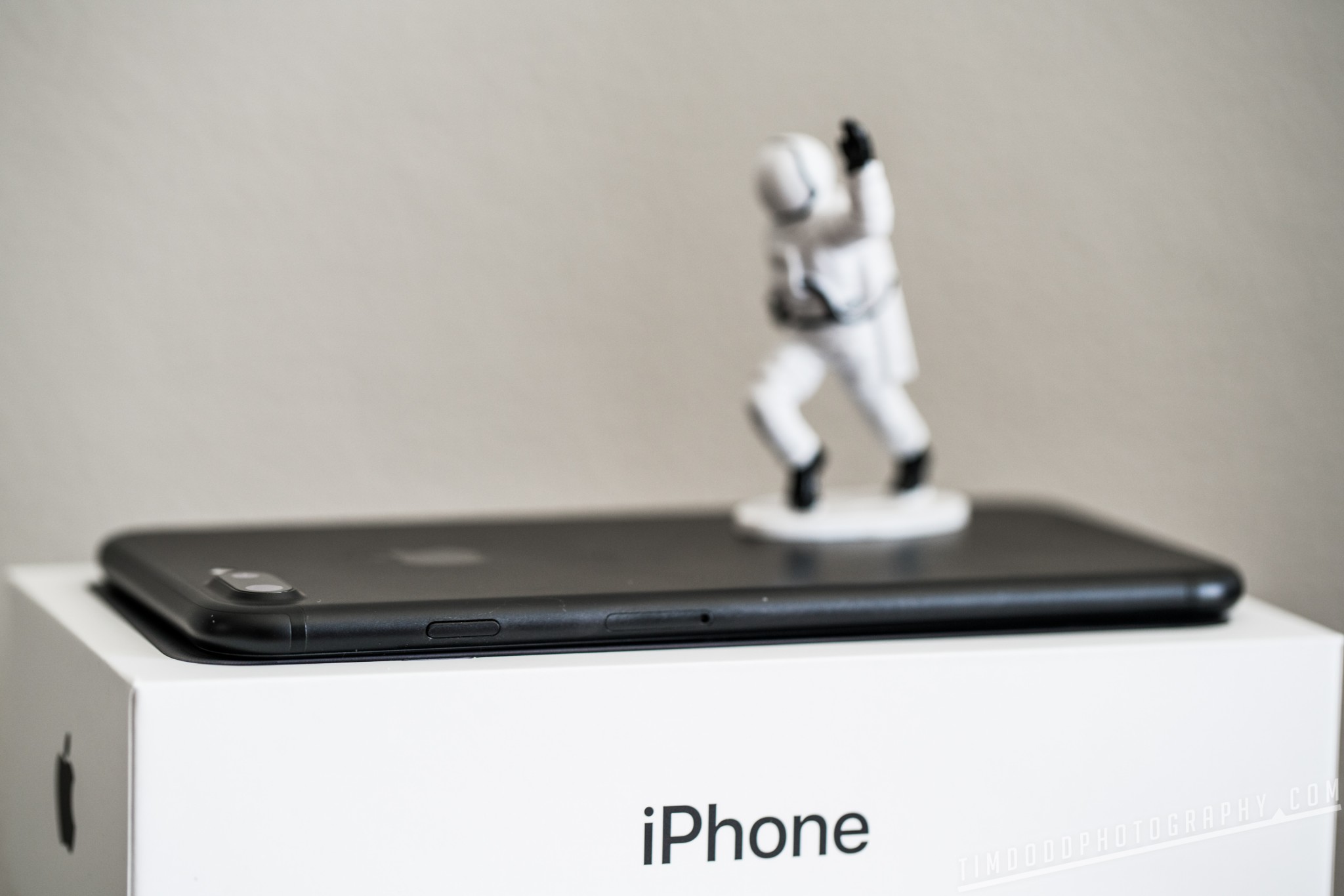 And just like always, it’s riding that fine line between disappointing and just enough improvements to buy it. The ONE thing that made me actually care about the release of this phone was the option to have two focal lengths on the iPhone7 Plus, effectively a 28mm lens and a 56mm lens. The 28mm lens also improved by 2/3 of a stop by going from F2.2 to F1.8, and also touts a new more sensitive sensor, so the iPhone 7/7 Plus ships with a pretty exciting camera. Oh, did I mention they can shoot raw too?! Well, I spent the weekend shooting with it, how’d it do? Glad you asked! 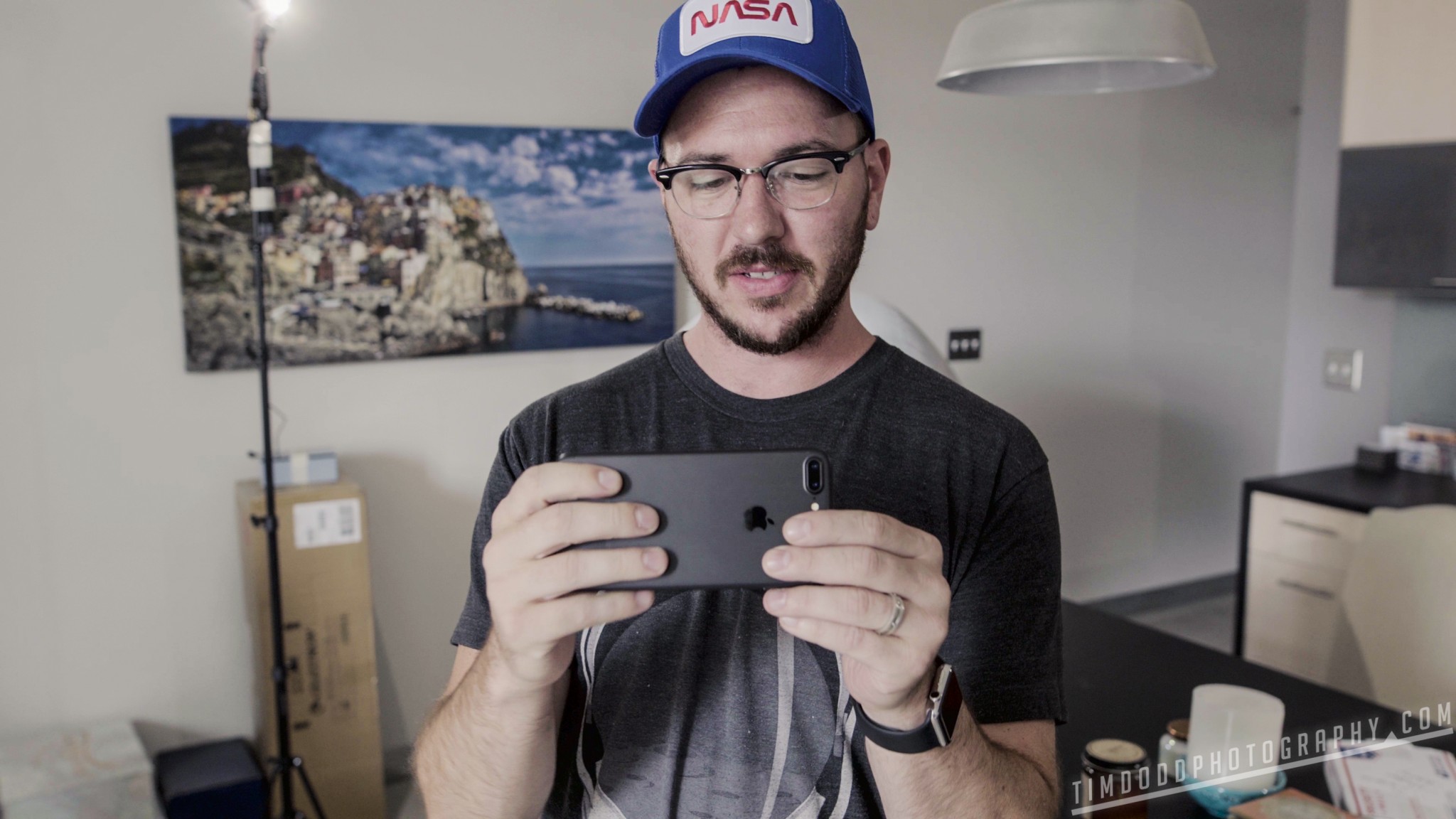 And here I go, about to put the iPhone 7 Plus through a typical set of shoots.

I actually postponed shooting a new @EverydayAstronaut series (my ongoing series of myself in a Russian space suit) so I could shoot something fun with the iPhone 7 Plus when it arrived on launch day. My eventual dream in life is to be able to quickly shoot decent files and edit them in Lightroom mobile and then put them up on Instagram all without sitting down at a computer. 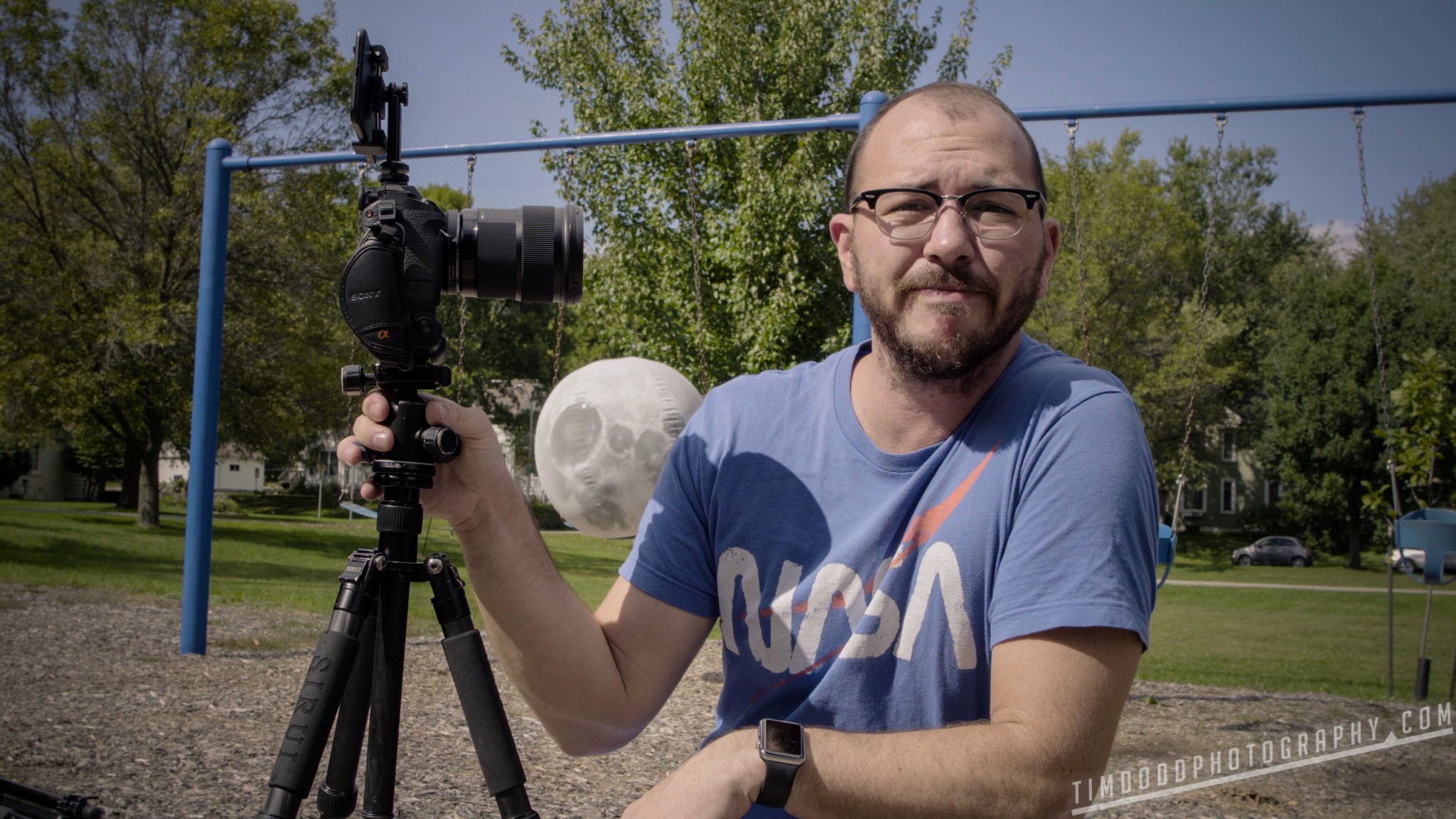 We mounted the iPhone 7 Plus on top of my Sony A7RII so we could shoot on both cameras at the same time.

I was anxious to see how the 56mm lens looked, and how good the new iPhone’s RAW files would be. So we set up for our first shoot which would be using a Sigma 50mm F1.4 Art lens on my Sony A7RII and set the iPhone 7 Plus on top. The point of this wasn’t so much to compare the files between the two cameras, (I’ll show you that later anyway for fun) but more so so I didn’t have to reshoot it if the iPhone’s images were unacceptable.

So how’d the iPhone 7 Plus do? 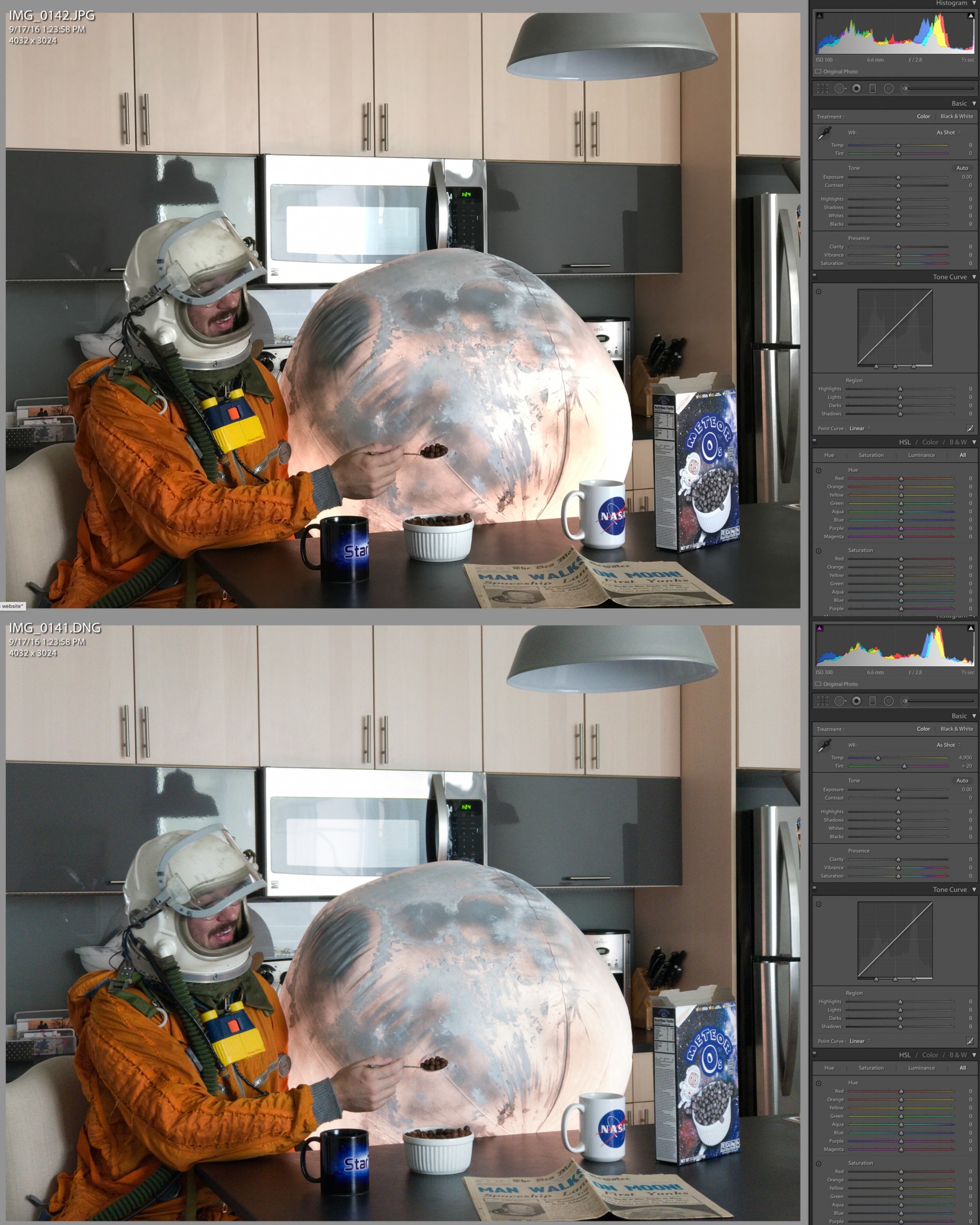 For this comparison I left the Lightroom panels open so you can see the difference in the histogram and get a peak at the settings of the camera. Also note the iPhone 7 Plus DNG file maintains the temperature and tint information, one inherent advantage to raw files.

Initial findings look positive. It might be hard to see in the above examples the difference, but the one place that’s obvious right off the bat is how much the highlights are maintained in the DNG file (bottom image) compared to the JPG (top image). Check out the microwave for a really clear example of the clipping from the jpg file in the highlights. Upon closer inspection we can clearly see noise reduction applied heavily on the JPG. There appears to be a lot of information lost in that JPG, information I’m glad we now have access to.

Let’s take a look at another image. 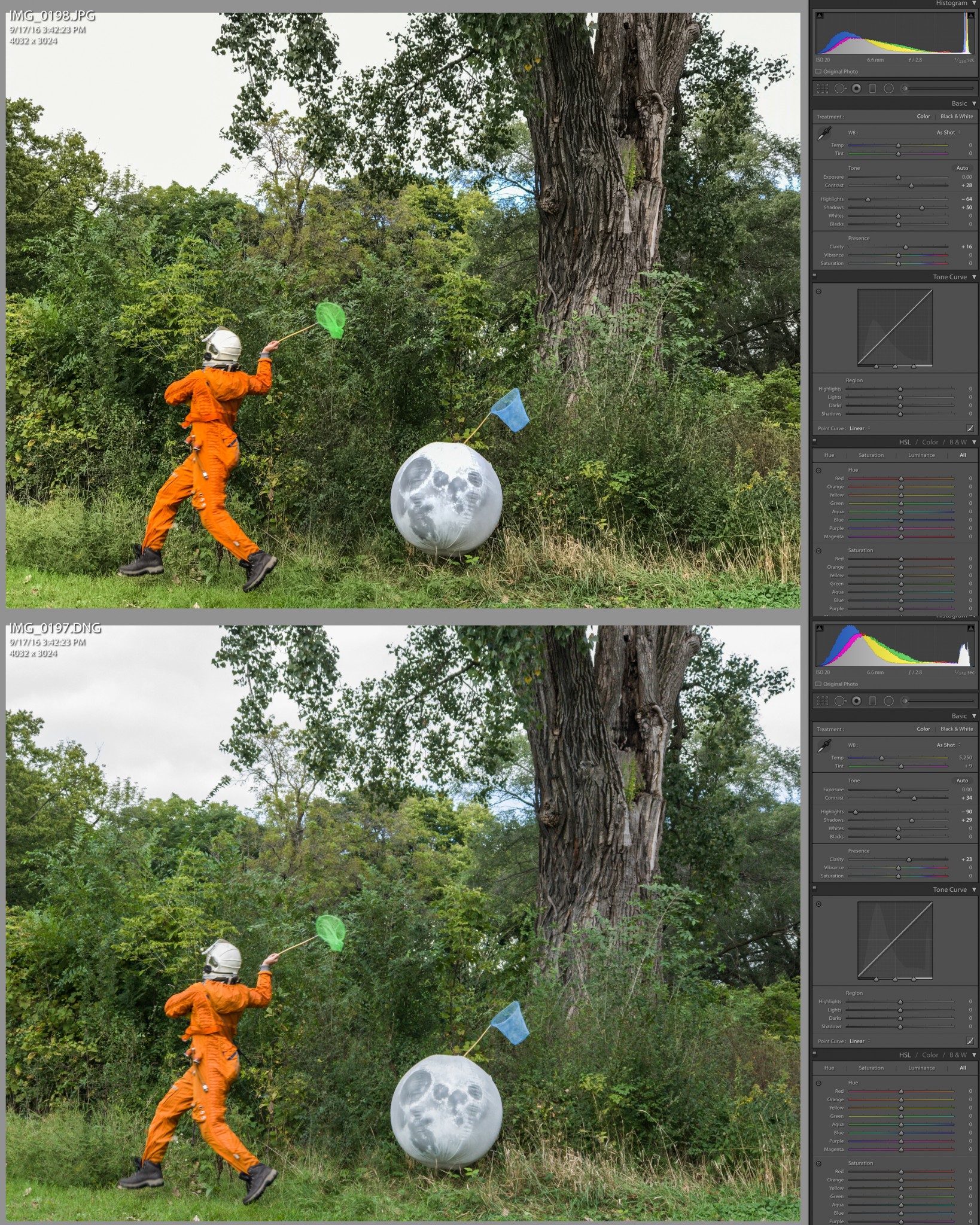 So again, initial results appear the have better highlight preservation in the DNG. It also appears that there is a LOT of saturation in the JPG. I for one am happy about this. When an image is over saturated, it seems to lose out on a whole lot of information. 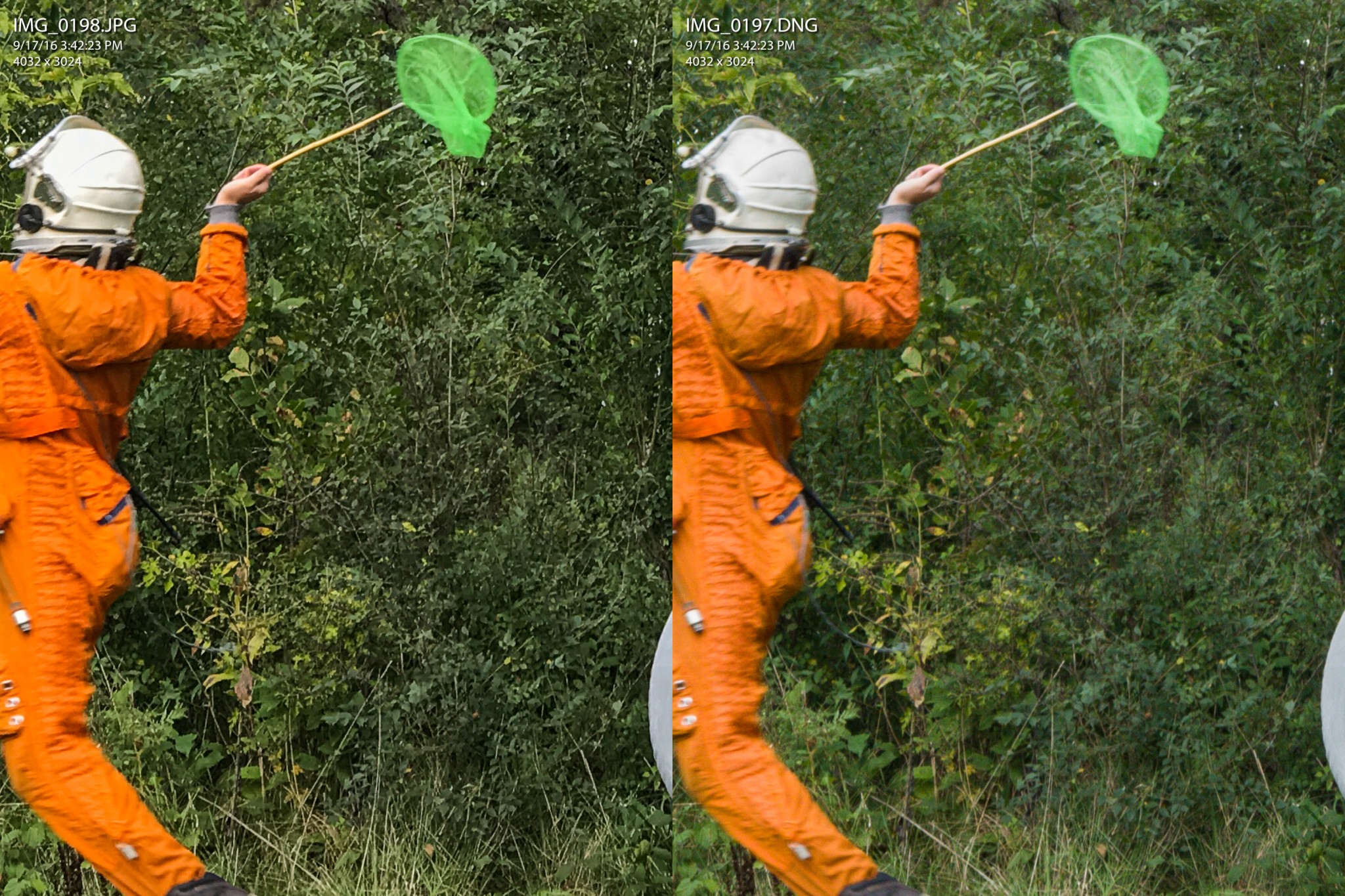 And again on closer inspection, our initial thoughts are confirmed.

Why are we spending so much time comparing DNG files to JPG? The more important matter is how well does the DNG file edit? Here you can see I applied similar edits to each image. This is where the biggest advantage of a DNG file comes into play. Notice the moon and my helmet. The JPG falls apart when it encounters the end of the data, resulting in gross splotches of white/grey. This is also obvious when we look at the two histograms. Notice how much more information there is at the top of the histogram in the DNG file compared to the JPG. This is very exciting stuff!

So, all is as we expected it. The ability to shoot in raw appears to be a great step in the right direction for phones. But now, the pressing question… how does it actually compare to a REAL camera?

iPhone 7 Plus vs Sony A7RII

Well ladies and gentleman. To the surprise of literally NO ONE, there still is a HUGE gap between a $40 camera embedded inside a phone and a $4,500, 42 megapixel professional system. In other words, Apple has performed no miracle nor did they even manage to break one single law of physics. Second of all, depth of field. There is simply no replacement to having a large sensor and a big fat wide aperture. Yes, Apple is working on a depth of field simulator that might be a lot of fun to play around with, but again, there will be no miracles. Apple will be utilizing the 3D data between the two cameras to map out 3D space and apply gaussian blurs to portions of the image that are in the background. This is a similar technology to what Lytro cameras have been doing for years. 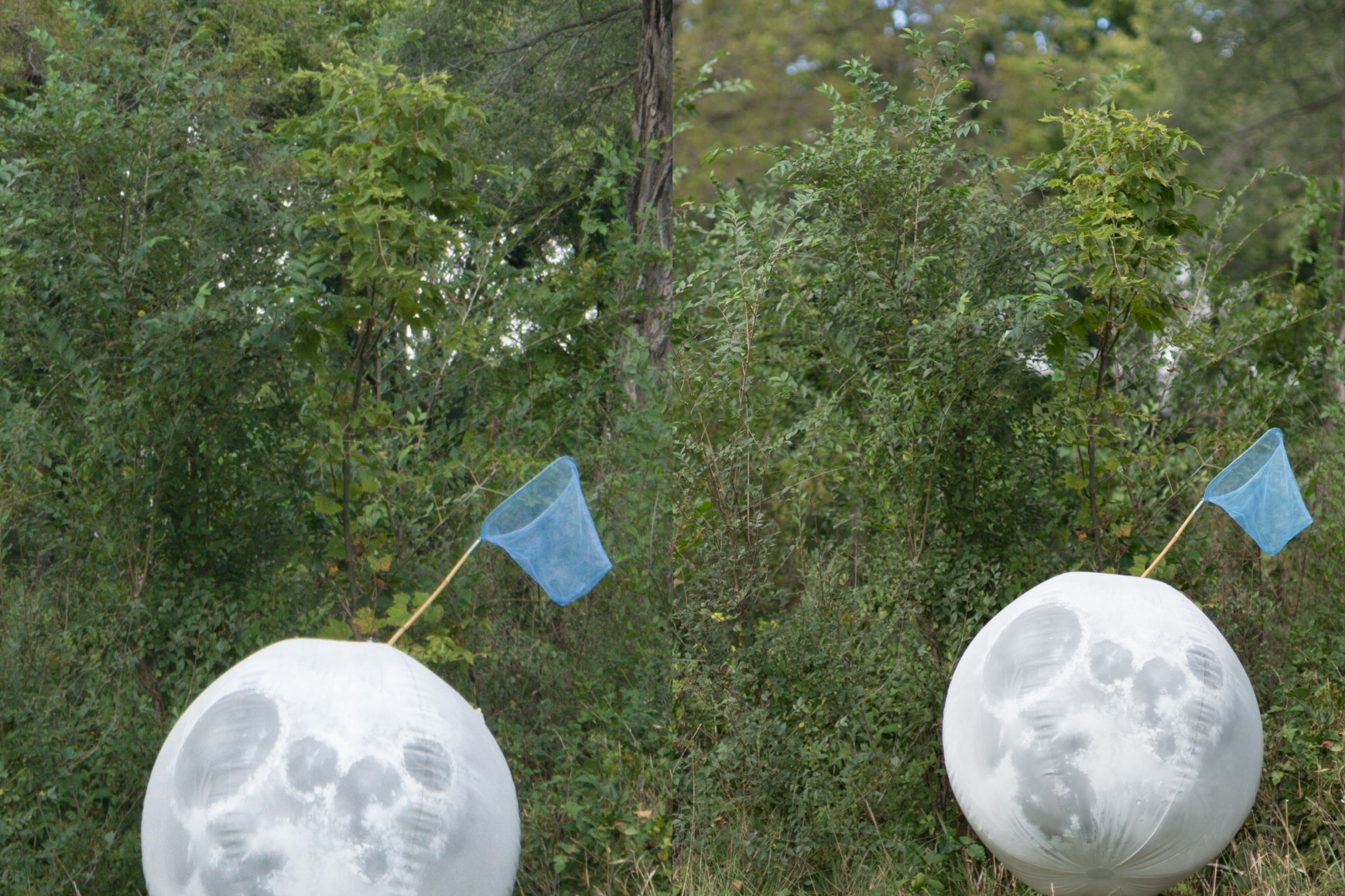 I must admit I got greedy and maybe made a mistake in being able to teach you something. The picture on the left is taken with an iPhone 7 Plus at 56mm (equivalent) at F2.8, the picture on the right was taken by my Sony A7RII at 50mm and F1.4. I wish I had shot the image at the right at F2.8 so I could show you how there is still going to be a HUGE difference in depth of field between the two images.

This is a simple lesson on why there is no getting around the physical size of a professional camera. Yes, camera bodies are getting smaller. My Sony A7RII packs a full sensor and feels a lot smaller than my Canon 5D MKIII, but this is obviously much different than comparing a full frame sensor camera to a 1/3″ sensor camera.

Let’s look at one more example just to rub in just how far we still have to go before phone’s cameras take over. 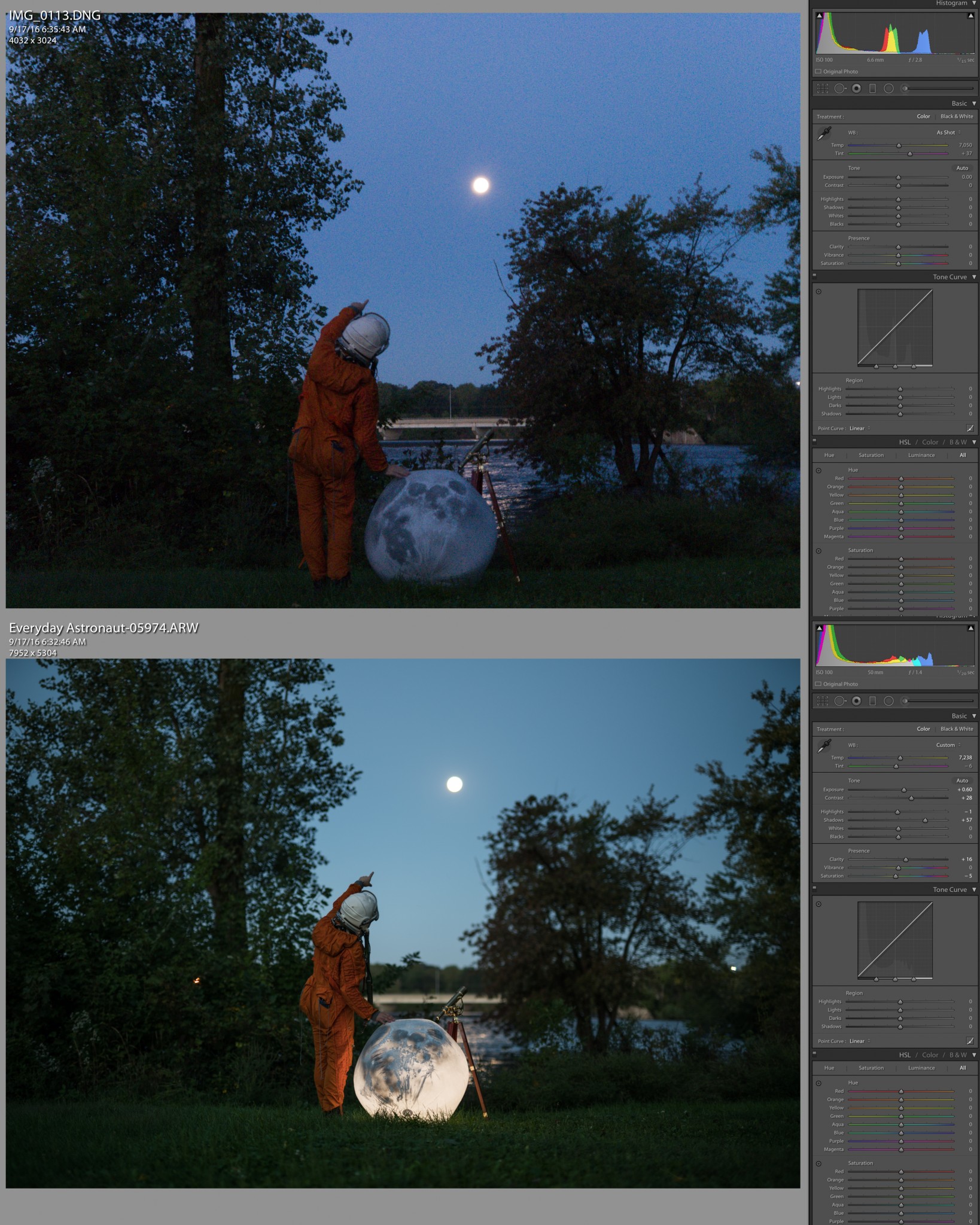 Again, I need to admit defeat in keeping a controlled environment, but the results are painfully obvious none the less.

First off, I used a bright LED to illuminate the inside of the moon for the iPhone picture (not really noticeable) while I used a flash inside the moon in the Sony’s picture.

Second, despite being at similar shutter speeds, the Sony is actually letting in 4 times more light by being at F1.4 compared to the F2.8 of the iPhone 7 plus. This is the square inverse law at play here folks. I probably didn’t even need to show you the cropped in images to prove my point, but in case you weren’t convinced, here you go.

And below are edit versions of another picture just so you get an idea of what they look like in a real world editing example. I shouldn’t have to tell you which picture came from which camera… So, I hope I helped put into perspective where the iPhone 7 Plus fits in the grand scheme of photography. Will it replace your DSLR, of course not, and we knew that. Is it moving in the right direction? OF COURSE! This is probably the biggest improvement in iPhone photography since the first iPhone and I’m excited to always have it in my pocket.

The real question is, is it worth buying an iPhone 7 Plus for the camera alone? To me, yes. Any improvement to the camera I use most often (or close to it) is welcomed with open arms. Is it worth it for the average consumer? Most likely not. If you’re eligible for an upgrade with your carrier and are wanting a new phone, don’t hesitate, but if you just got a 6S last year, I think you’re ok holding off.

Want to check out the files for yourself? Have at them!  (No sign in required)

Did you get the new iPhone? Have you played around with the camera? Thoughts? Leave them in the comments below!

Thanks to Neal Johnson for helping shoot the video for this review!