The best camera is the one you have with you

I’ve always been someone who wants the best, most expensive, newest things. I say this all while glancing down at my shiny new iPhone 5, siting next to my 5d MK III, while contemplating what car I want next. I try to curb my appetite with things like consuming copious amounts of Arnold Palmer, making online wish-lists and researching things until my eyes bleed.  I’ve written posts about what I think makes a good professional photographer and why I love prime lenses. All this being said, some of my most impacting images were shot with my cell phone.

The purpose of this post is to encourage you to break outside of the mindset of “I need a full frame camera with super clean 32,000 ISO with a prime f1.4 lens,” or “The picture needs to be taken at faster than 1/60th of a second and the flash can’t be on the camera to look good.” I’ll show you examples of images that mean so much more than the technical jargon behind them. Sure, I think all photographers should have a good, solid knowledge of the workings behind a shutter button. I also think we should all spend a healthy amount of time and money on a gear upgrade plan. But in the long run what really matters is capturing the moment.

I have always thought that a photographer’s job isn’t just to take pictures, but to tell a story. I never thought I was very good at throwing words together into coherent sentences (my English ACT score will vouch for that), so I’ve always relied on visual elements to convey a story. I hold this standard in everything I shoot, especially weddings. It’s important to evaluate a scene with an outsider’s perspective and question, “What would an outsider need to see in order to feel like they are here?” 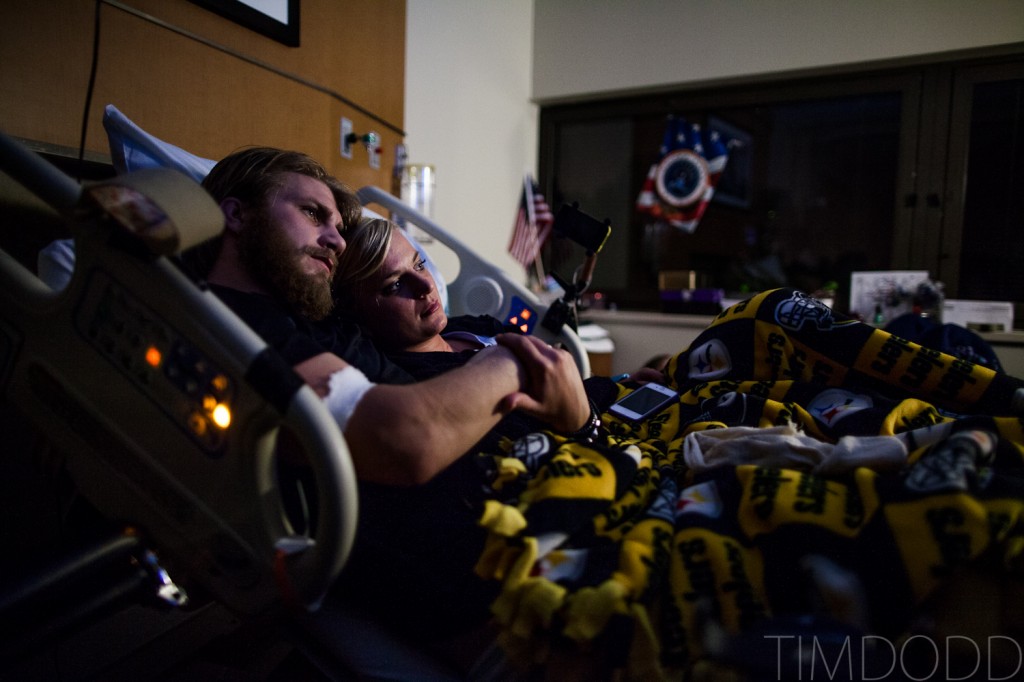 Taylor’s girlfriend, Danielle, and mom, Juli, started blogging about Taylor’s progress, but I was still left with questions keeping me up at night. I knew when I went out to visit Taylor for the first time in June, I’d have to answer a lot of the same questions that I had for people back home. But the two questions that tugged most at me were “How did Taylor and Danielle’s relationship function now?” and “What was Taylor’s general attitude toward everything?” So that’s what I focused on. 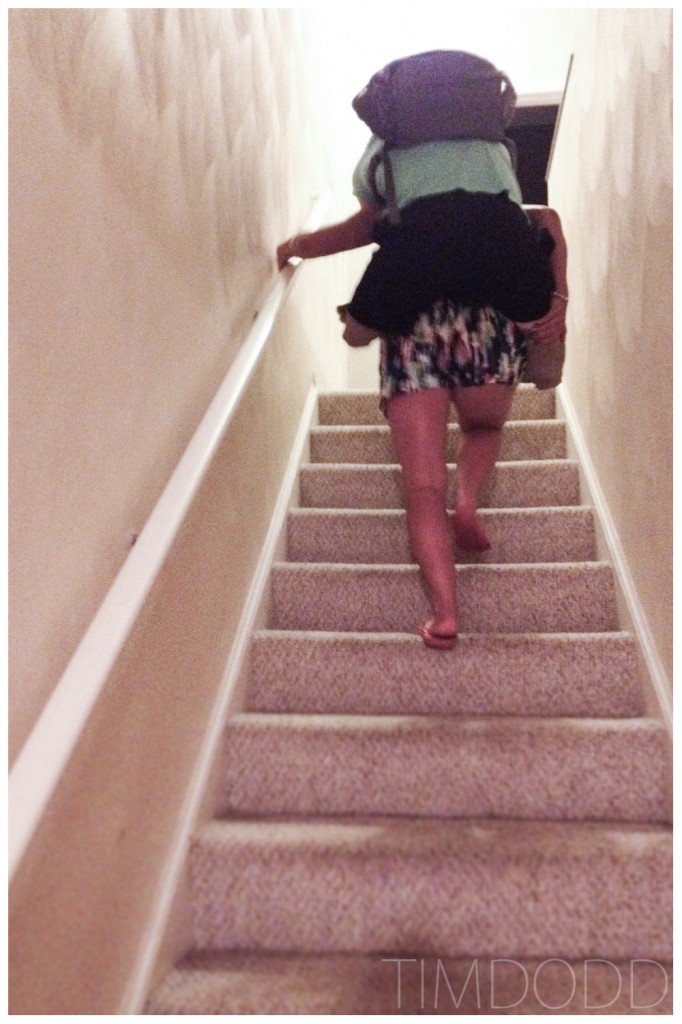 I’m not sure where I first heard “The best camera is the one you have with you,” but it has stuck with me since the first time I heard it.  Those words of advice echoed in my head every time I visited Taylor and Danielle. The second time I visited Taylor in August, we drove down to their house in Virginia Beach over the weekend. While we were carrying our bags inside, Danielle carried Taylor. Danielle is a tiny girl, probably only 5’3″, but she is so incredibly strong. In fact, she carries Taylor often until he can climb stairs on his own again someday. Since my hands were full of bags, the only camera within reach was my cell phone. I snapped this picture quickly and put it away. Later on, I realized how powerful that grainy cell phone image was. 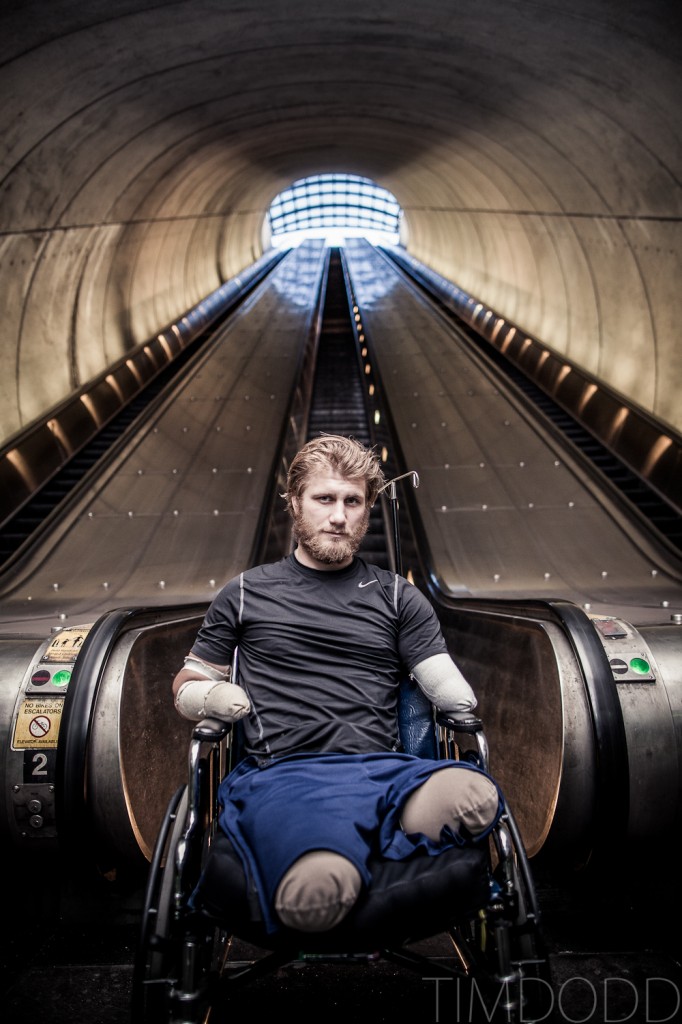 The first blog post I wrote was entitled, “Do you know my friend Taylor Morris?” I knew as I was crying writing it that I had captured in images what was missing from Taylor’s story. I still remember what song I was listening to while I edited this picture of Taylor, The Ghost Inside’s “This is what I know about sacrifice.”   I knew that with the single click of a shutter, I managed to capture so much more than the sum of its pixels. The picture has obvious symbolism; at that moment, Taylor was unable to use the escalator–it was his biggest obstacle–but there is light at the end of the tunnel, and we all knew someday things like escalators wouldn’t be a big deal. It’s a picture of defeat sparking a challenge.

As a professional, sometimes you have your camera but not all the equipment, so again, you need to work with what you have. My friend Neal who came out to visit Taylor with me talked me out of bringing a studio flash, battery pack and a 36″x24″ softbox.  Am I glad he did? YES. We ended up walking for two hours the first night in DC trying to find our lodge at Walter Reed Medical Center. The statue-like deer and frolicking squirrels were already laughing at me for carrying 50 pounds of camera gear. Had I been lugging around an extra 40 pounds, I probably wouldn’t have made it.

What I did have with me was a standard 580 ex flash and a piece of paper.  I placed Taylor centered with the middle escalator, set up a tripod, pointed the flash straight up and back about 15 degrees. Then I held up a piece of paper about 3′ above the flash pointing at Taylor. I used it as a bounce to give the flash a more diffused and less directional feel. It worked well enough to capture the image. Had I brought the softbox and studio light, I’m sure the end result would’ve been virtually the same thing, so sometimes its best to just work with what you have.

The picture above was also taken with a 580ex and a piece of paper. It’s not the softest light in the world, but when you’re carrying everything on your back, it’s simply unrealistic to keep a studio flash, battery and softbox on you at all times. 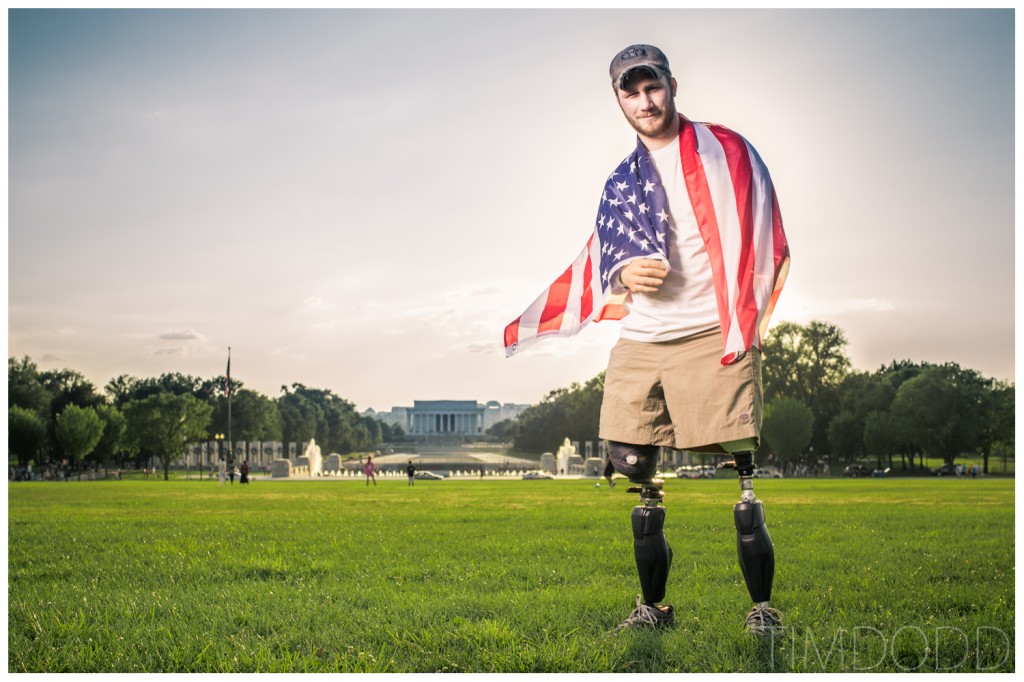 I completely realize the integrity of my post will be ruined with this image. This shot of Taylor on the National Mall in Washington DC was taken with a full 24″ x 36″ soft box, a battery pack and a full studio light. But what matters here isn’t the technical aspects of the image, it’s the subject. Look at Taylor, how incredible is he? If it weren’t for my subject, this would be a mediocre at best picture of the Washington monument from a mile away. Nothing too exciting. Since I had planned this shoot with Taylor ahead of time, I made sure I had all my equipment on hand. This time I could go all out and was able to capture the image I had envisioned. 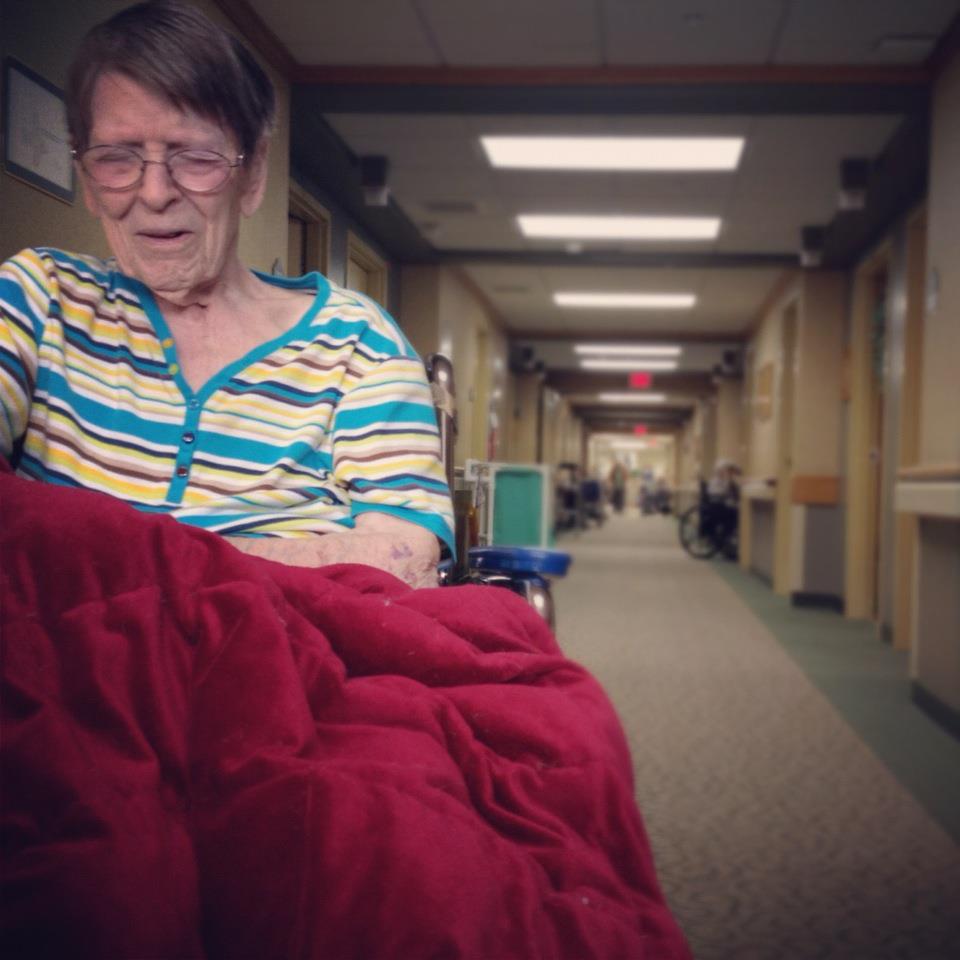 This is the last picture I ever took of my grandma Dodd who just passed Monday, October 8th. She happened to pass on her late husband’s birthday.  I never took my DSLR when I visited my grandma, so all I have of her is this grainy Instagram picture of her, but it still means a lot to me. I don’t think a DSLR would’ve done any better job of capturing this image than my phone. As a matter of fact, she didn’t even know I was taking a picture. Had I pulled out a DSLR, I’m sure she would’ve changed what she was doing, leaving me with a different image.

So what’s next for me in my professional career? I’ve always had an obsession with traveling and have been to Europe twice and Thailand twice. I’ve dreamt about leading a photography tour for a while, so this upcoming May I’m taking 12-15 photography enthusiasts to Florence and some surrounding areas to teach them how to best use what they have.  I want to teach people that it doesn’t matter if you’re shooting a full frame camera with an “L” lens. Some of my favorite pictures I’ve taken were with a cell phone or a Canon 20D with the kit lens!  I want people to utilize the idea of “The best camera is the one you have with you.” There’s still room on the trip, so if you’re interested, check out my post titled “Meet me in Italy” on my blog. 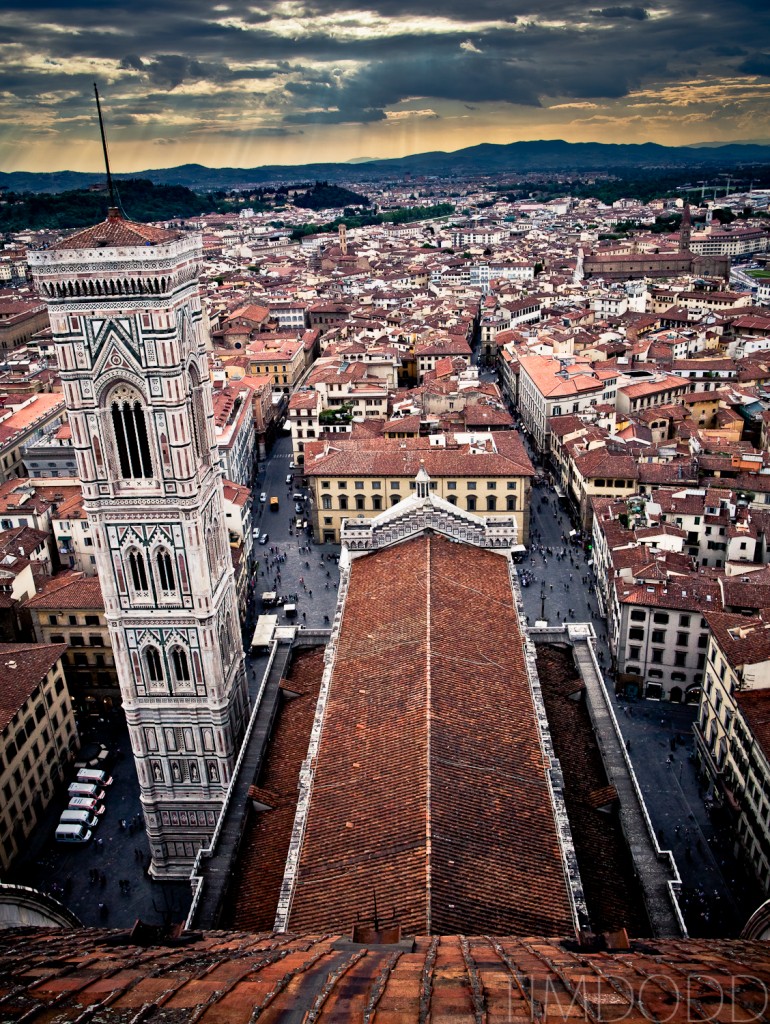 To keep up with Taylor’s story, please visit www.taylormorris.org

beautiful story…thank you for sharing.

Verry inspiring work! Your photos or florence and europe are amazing, I was looking on google for euro phtoography and found your site, I'm going on 20 of may to France/italy and I'm glad I saw your photos, keep the amazing work!